COME ONE! COME ALL! TO THE CIRCUS CARNIVALE!

Ruby and Scarlett at the Circus Carnivale!
A New Children’s Play 🎪🤹🏻‍♀️🎡

Ruby and Scarlett are sisters.
They don’t get along!
But then, at the carnival, something goes wrong
Scarlett gets kinda lost, so Ruby must find her
While searching the circus, they get a reminder
That taking good care of your family, though tough-
Can actually be the most magical stuff.

Games! Treats! Music! Fun for All!
Join Ruby and Scarlett at the Circus Carnivale!

Starring...
Kiki Girard as THE STRONGMAN!
Tamara Koltes as THE FORTUNE TELLER!
Mitch Mitchell as THE ACROBAT!
Cosette Ruesga as THE HALL OF MIRRORS!
Kiré Horton as THE FERRIS WHEEL OPERATOR!
Jessie Shear as OLDWOMAN!
Marlisa Guevara as RUBY!
And Sierra McWaters Licata as SCARLETT!

At the beautiful new ARTSpace Blackbox Theatre in Simi Valley!

ONE DAY ONLY- two shows back to back!
Come join the fun, see the play, have a snack!
This show is especially fun for the kids,
So bring the whole family! You’ll be glad you did. 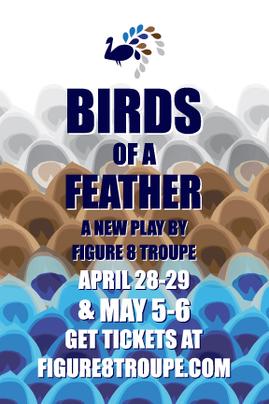 We invite you to play with us in Peacock Paradise, a magical world where peacocks live and learn and CAW in harmony.

Meet Bo, a unique peacock who has always had their besties beside them. Now with the talent show coming up, the friends are starting to drift apart, and it's time for Bo to make some choices. Will our hero overcome the status quo and learn that the best thing to be is simply yourself?

This production will delight kids and adults alike, so bring the WHOLE FAMILY to a beautiful play that will help theatregoers of all ages fan their feathers with peacock pride!

Tickets are pay what you can (click on the link to the left to purchase ahead of time)!

Come be a part of our most colorful play yet!
Birds of a Feather
Playing TWO WEEKENDS at Sierra Canyon School's Amphitheater!

Chelsea Carroll as the Feather Fairy

Tickets available for purchase at the door.

RSVP using the button below to ensure entry. 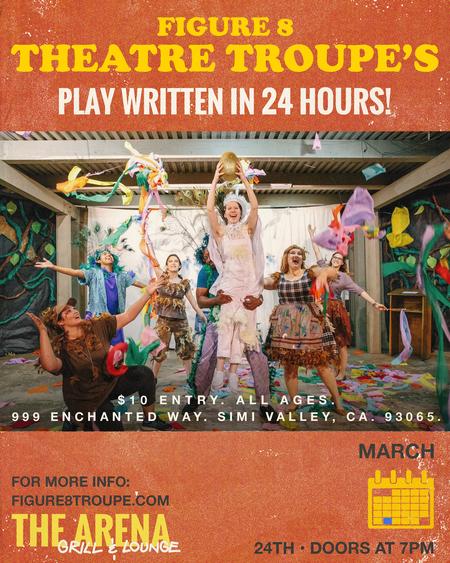 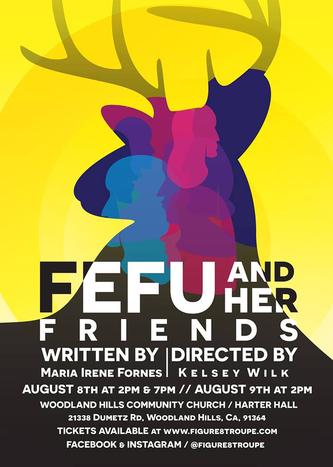 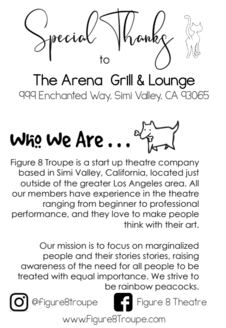 Buy Tickets for "Birds of a Feather" 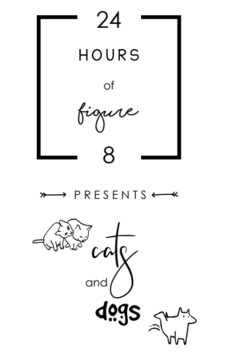 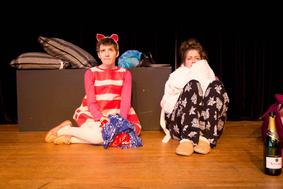 Get ready to get weird.

Journey from the Center of the Fridge 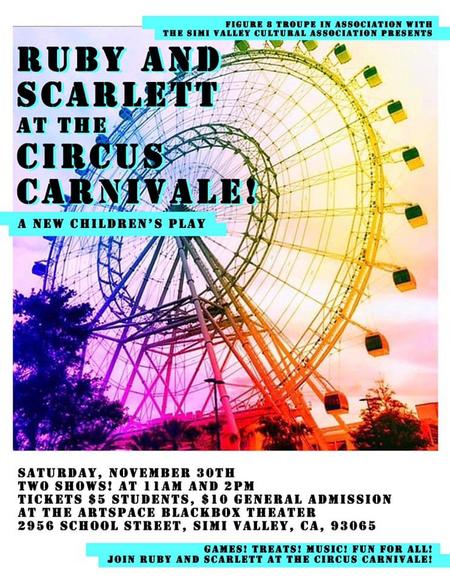 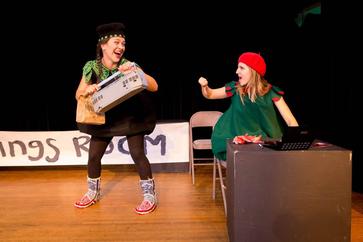 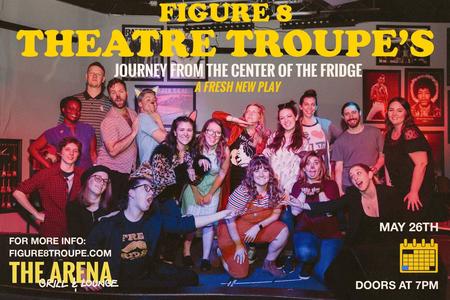 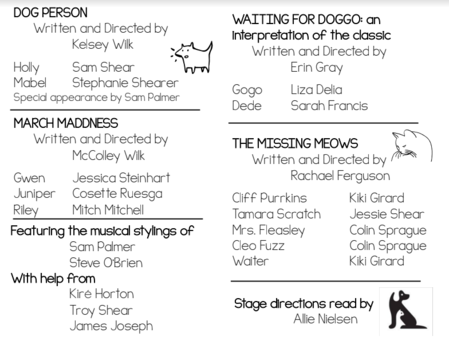 Tickets available at the door.

This series of short plays will be written, directed, produced, and performed, all in the course of 24 hours!

These brand new plays will be experimental to say the least! In the past, our plays have featured giant iPhones, talking ham, witches who work at Taco Bell, and non-binary peacocks. You can expect even more outrageousness out of this show.

We wish we could tell you exactly what the shows will be about, but even we don't know that yet!

This model for creating original work has been used for decades by professional and fringe theatres all over the world, and we are so excited to bring this unique experience to the Figure 8 Community.

Featuring the talents of (in no particular order): 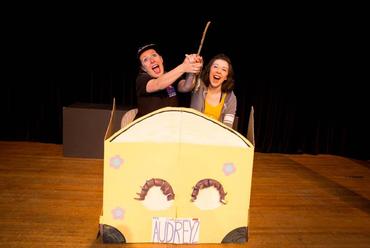 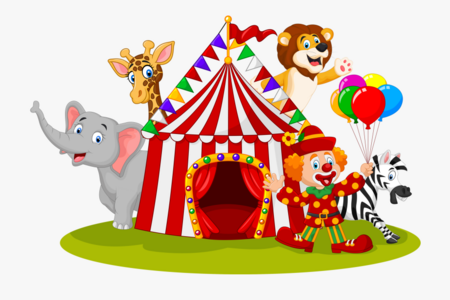 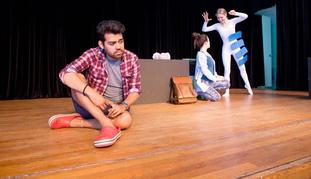 Fefu and her Friends by Maria Irene Fornes

​A Play in 3 Acts
by Maria Irene Fornes

Figure 8 Troupe made its triumphant return with...

Watch the Fefu and Her Friends trailer! 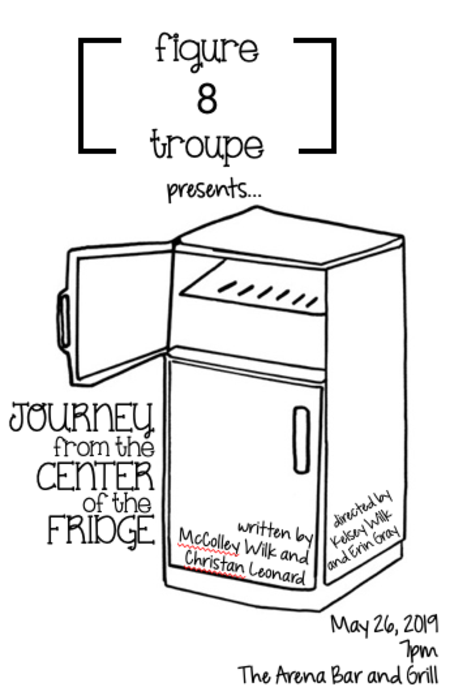 More about our inaugural endeavor:

"Fefu and Her Friends" is a brilliant piece of feminist theatre written by Cuban born Maria Irene Fornes. This piece was written in the 1970s but takes place in the 1930s, and explores aspects and issues that are still relevant for females, and any underrepresented group, today. Using the style of magical realism, Fornes takes the audience to another place that is exactly the same as our own, excepting for that more is possible. The performances were done in the style of theatre in the 70s in New York -- "underground." The audience is as important to the show as the performers themselves, each gleaning something from the performance and creating magic themselves.

Through an amazing partnership with the Woodland Hills Community Church (WHCC), a progressive congregation in the greater Los Angeles area, we were able to put our performance on stage in our dream venue. It was the first place in the San Fernando Valley at which Martin Luther King Jr. spoke, and since has been devoted to promoting justice and equality both locally and globally. Full of history, Harter Hall at WHCC was the perfect venue for this performance.

"Fefu and Her Friends" was performed "promenade" style, meaning that rather than the set changing as in a proscenium style theatre, the audience traveled to a new room for each of the scenes, exploring the space as they learn of the characters and situations. During the second act, when all of the promenading occurs, the audience was in four sections. Each section experienced the four scenes in a rotating order.

This play is an exquisite and important piece of theatre that deals with themes of education, gender theory, social change, and the importance of the arts. The audience walked away with more than just a smile and a "that was nice sweetheart." Each audience member was changed on exiting the performance.

This is an important piece of theatre, and we were honored to share it with the world. Now, 80 years after this play is set, and 45 years since it was written, its themes still resonate, and are more important than ever to convey. We hope to have promoted comprehension and scholarship among a new generation of theatre-goers and thinkers, and stimulated forward thinking in another generation accustomed to mechanical theatre meant only to entertain.

Thank you for your dedication to knowledge and the arts!

Ruby and Scarlett at the Circus Carnivale!

2 tix for $10 for students with valid ID

The Los Angeles premiere of

It's a Gift Shop After All,

and ​At Least I Still Have You,

Tell people you love us! Use #flocktogether and #figure8troupe to spread the word!​

From 118 Eastbound or Westbound:

-THERE IS NO SIERRA CANYON SCHOOL ACCESS THROUGH INDEPENDENCE AVE. PLEASE USE VARIEL.

-Turn left at the guard tower to park in the lower school lot. Alternatively, there is also street parking available.